**All patrons are highly recommended to wear masks indoors**

On July 29, 2021, Cook County entered into the substantial spread category of COVID-19 and its variants.  Based on recommendations from the CDC and IDPH, we highly recommend that all patrons, regardless of vaccination status, wear a mask in all public indoor settings until further notice. Please remember that some facilities serve high-risk groups including seniors and school-age children who are not vaccinated.  Beginning August 2, all children 12 years and under and their instructors are required to wear face masks at all times while indoors.  Additionally, all individuals, regardless of vaccine status, in our school-related programs, must wear masks at all times. Thank you for your cooperation.

Kelly began working at the Salt Creek Park District in April of 2017 and has 20+ years of experience working in the recreation field. She graduated from the University of Iowa with a degree in Sports, Health, Leisure & Physical Studies. She previously worked at the Addison Park District and Pleasant Dale Park District in Burr Ridge. Kelly is involved with the IPRA Recreation Section, serves as a board of regent of the IPRA Professional Development School and a member of SPRA. Kelly is married, a mother of three children and enjoys running, softball and coaching her children’s sports teams.

Kristin joined the Salt Creek Park District in March of 2021. She graduated from Illinois State University in August of 2020, with a degree in Recreation Management and a minor in Communication Studies. Kristin previously interned at the Itasca Park District and Arlington Heights Park District. She loves walking her dogs and biking outside in her free time, along with spending time with her family.

Ashley has nearly 15 years of experience working in the golf industry in a variety of positions at the Des Plaines Park District and TopGolf. She also has a background in sales and event planning from working at TopGolf and Pinstripes. She graduated from Roosevelt University in 2011 with her MBA. She enjoys handling day to day operations both administratively and working hands on with her staff.

Cindy recently joined Salt Creek in January of 2019 as the Assistant Facility Manager at Twin lakes. She has been a Salt Creek Park District resident for 29 years and involved with the park district in various roles, such as preschool assistant teacher, rental coordinator and volunteer. She has a background in Interior Design. She is married with 2 grown sons and enjoys baking, cooking and gardening in her free time.

Nick joined the Salt Creek Park District staff in October of 2016. Previously Nick spent 6 years working for the Rolling Meadows Park District in numerous roles within the ice arena including the Hockey Director. Nick graduated from Marian University in 2010 with a degree in Sport and Recreation Management where he also played four years of NCAA hockey. Nick resides in Hoffman Estates with his wife Kaitlyn, daughter Kylie and son Cameron.

Moira began working at Salt Creek Park District in January 2018 as the Finance Manager. Moira has enjoyed working in the Accounting and Finance field for many years and employed for the past 12 of those years within the Parks and Recreation Field. She previously worked at Wheeling Park District and River Trails Park District. Moira is a local resident who has enjoyed many of the wonderful programs and special events that Salt Creek Park District offers. She is married and enjoys boating, hiking and spending the weekends with one or all of their 7 children and their families. 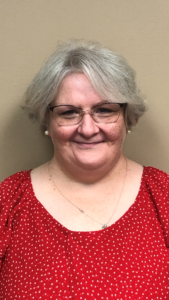 Heather joined the Salt Creek Park District in July 2021. Heather is our new Office Administrator and will be assisting with registrations & customer service at Rose Park. Heather enjoys spending time with her husband Steve and their dogs Max & Cooper and loves vintage shopping and gardening.

Phyllis is the Administrative Assistant and works at the front desk at our Rose Park office. She has been a Salt Creek resident for the past 16 years with her husband Brian and two girls actively taking part in the Salt Creek programs and events. She is originally from South Africa and moved to the United States in 2004. She is an avid crafter and baker, and enjoys spending time with her girls and large menagerie of pets in her free time. Visitors are always encouraged to stop by and say “hi “at the office.

Rick has been in the Parks and Recreation Field for 27 years. He is an invaluable asset to the Salt Creek Team. He enjoys fishing and sports in his off time.

Install this application on your home screen for quick and easy access when you’re on the go.